Sanity Effects are a gameplay aspect of Eternal Darkness: Sanity's Requiem. They are first seen when playing as Ellia, because Pious Augustus does not lose sanity in his chapter.

As the player character is seen by monsters, their Sanity Meter depletes. Sanity Effects usually trigger when entering a room, and can sometimes be triggered by interacting with the environment (most commonly by picking up items). The lower the Meter when entering a room, the more likely a Sanity Effect will occur and the more severe it will be. Some are merely cosmetic, though most will seemingly hinder or outright harm the player. When a seemingly-harmful Sanity Effect ends, the screen flashes a bright white, after which everything returns to normal as the player is teleported to wherever they were when the sanity effect began (almost always meaning whichever door the player walked through last) and exclaims something along the lines of: "This can't be happening!", "This isn't really happening!", "What's going on here!" or mostly scream. If the Sanity Meter is empty, health depletes instead, although this has no bearing on Sanity Effects.

Usually, if a Sanity Effect is present, then you will not be able to escape its effects and resume regular gameplay until it plays out.

Most effects occur randomly, although some are scripted to appear only in certain levels or at certain points (See "Other Examples" for these.)

The effects come in several varieties, sometimes affecting the screen, character, or environment.

Changes are made to the camera angle. This change increases in severity the lower the Sanity Meter gets.

In Metal Gear Solid: The Twin Snakes, during the boss fight with Psycho Mantis, the latter will occasionally tilt the room they are in with his psychic abilities, a reference to one of the Sanity Effects in Eternal Darkness. Both games were made by Silicon Knights.

The "Blue Screen of Death".

The adventure on "Mute". 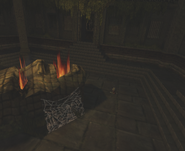 The character sinking through the floor. 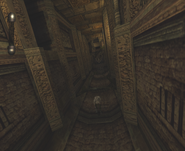 A hallway upside down.
Community content is available under CC-BY-SA unless otherwise noted.
Advertisement