Oublié cathedral ("Forgotten Cathedral") is a cathedral church located in Amiens, a town in northern France. The player visits this place on several occasions (SOME SPOILERS BELOW):

814 A.D. - as Anthony, in charge of delivering a message to Charlemagne who is currently residing at Oublié Cathedral. During the course of the level, it is spent primarily in the Old Tower, where routes within this level are not found during the rest of the game where the Cathedral takes place, such as the bookcase up stairs of the Old Tower, as only Anthony could gain entrance to it as a shortcut to the room where the fight with the Bishop takes place (It is unknown whether the main cathedral itself is built during this time frame and is simply inaccessible, or the Old Tower IS the entire Cathedral.). There were also mysterious deaths occurring with the monks, one of which fell from a rampart, although it was implied that he had been the victim of a Bonethief attack upon inspection. In addition, the Bishop (strongly implied to be under the command of Pious Augustus) ordered for the assassination of Charlemagne, and was implied to have been responsible for creating the cursed scroll that Anthony intercepted.

1485 A.D. - as Paul Luther, a monk on pilgrimage who wants to see a holy relic (the Hand of Jude) that is said to be kept at Oublié cathedral. Much has changed with the building's design, such as the size and routes the player must take in order to navigate through the level. Instead of just taking place in the Old Tower, it now takes place throughout the entire Cathedral, the Old Tower being a brief place to stop at for some items, and a battle with Anthony's corpse, upstairs contains an entire library as well as a bone thief hiding between the shelves.

The entrance underground through the Old Tower (i.e. where Anthony goes in) is inaccessible and is instead located within the main Cathedral itself, in the main worship hall and downstairs behind a secret room where the communion wine is stored. The main difference, is the Black Guardian's chamber, located at the very, very bottom of the Cathedral. It is a cyclopean chamber with chess pattern-like floors, many statues carved within the walls and of course, the Black Guardian. At the very end of the hall is a stained glass window of what appears to be an angel about to be torn apart by a creature's tentacles, and behind it, is the artifact of whatever rivals Pious.

In the main chapel area, the altar was absent of various necessary items for a Cathedral and the tabernackle was empty save for a font of power medallion, causing Luther to wonder just what the people in the cathedral were practicing. The Old Tower was also largely in ruins, with at least one monk having recently been attacked by a Bonethief and successfully possessed just as Paul Luther arrived.

1916 A.D. - as Peter Jacob, who stays at Oublié cathedral during World War I. Many has changed as well as stayed the same in the level. During the war, the Cathedral was changed into a field hospital where many of the pews of the Cathedral main hall has been shoved aside and has been replaced with hospital tents and beds, filled with killed and injured French soldiers alike. Also, the sounds of artillery and gunfire could be heard at all times on the Cathedral's surface.

In the room where Paul Luther was momentarily jailed (i.e. the room with the emerald), the floor is nearly littered with the blood and bodies of soldiers who lost their lives within the war, and perhaps in even more sinister ways. Also, propaganda posters have been sprawled on the walls instead of the Cathedral's previous paintings. The Bell Tower has not really changed what-so-ever, but the Old Tower certainly has. The pews of the Old Tower have been shoved completely aside, as if the medical staff was planning to expand the hospital due to the main hall's bloated ranks. Peter's experience of going into the Old Tower is almost the same as that of Paul, as the player can see a nurse getting attacked by a Bonethief, similar to Paul's to where a monk is being attacked. But unlike Luther's level, The player actually has a choice to let her die, or save her. If Peter saves her, he is awarded with extra rifle ammunition.

Upstairs of the Old Tower, the books and shelves of the Library have been completely been removed and on the wall across the stairs is the Two-Edged sword hanging. The room where the battle between Luther and Anthony is almost completely different. Before, it was merely empty so Paul and Anthony could duel, now, it is filled with supplies, ammo, and soldiers in body bags, as well as Zombies. This room is difficult to fight in, as the place is very crowded with the supplies and other things within it. The entrance to the underground section once again changes locations. Before, it was upstairs of the Old Tower at the bookcase (Anthony), then, it was in the communion wine cellar behind a secret wall (Luther), now, it's within the room where Paul would get the crossbow and the podium key.

The specific location is where the robes and podium key would be at if the player was in Paul's chapter, the robes in the closet are now gone, and now all that remains is a hole with the top of a ladder sticking out, which leads Peter to the underground tunnels and chambers of the Cathedral. The Underground has not changed much between Paul's and Peter's levels. The only things that have truly changed are the entrance way, the sacrificial sarcophagus of the Custodian is now gone, and within the room where the battle between Anthony and the Bishop took place, the Altar with the candles changed as well. The number of candles on the altar grew and changed to purple, and the carving has changed as well. The chamber of the statue bust that looks at you has been removed completely (the same statue is in the Roivas mansion).

The sacrificial chamber where Paul finds the Custodian is left unchanged. But, instead of the Custodian's corpse being on the alter, a vial of magickal elixir is found in its place, which can provide Peter aid against the Black Guardian. The room with the book shelves and the secret pushable entrance hasn't changed much either, except a few more books have been added to the shelves and is significantly darker.

Finally, the lair of the Black Guardian has only changed in minor ways. Now a big gaping hole is at the end of the chamber, containing the Guardian itself, and around the hole are multiple large splatters of blood and bones, where the monster has done its damage, fresh and dried splatters en masse, Paul Luther's among them. 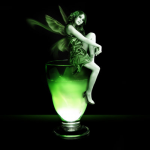